Oaxaca festivals is the way of life in Southern Mexico. The state of Oaxaca has a deeply-rooted culture and the people carry on these traditions every year. This is an area of Mexico where every festival counts, big or small. 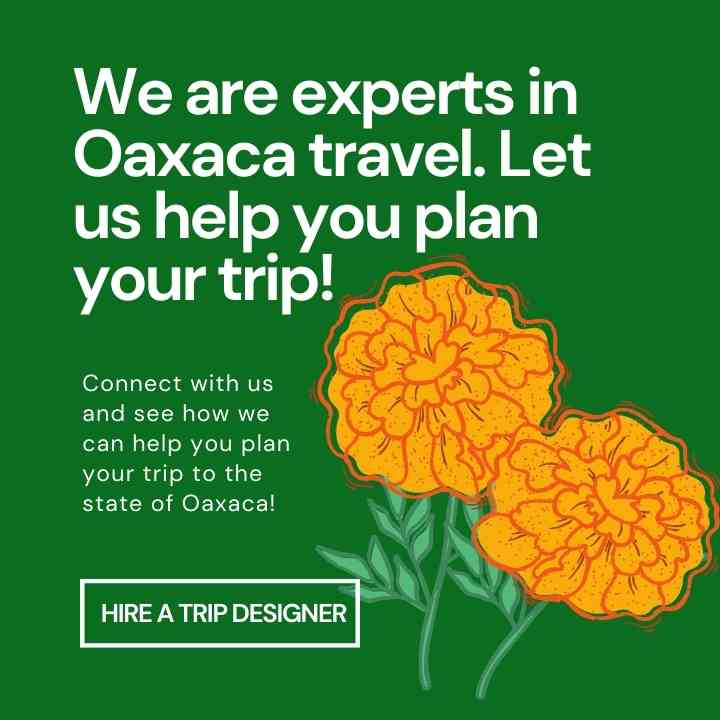 The Oaxacans are also born for festivals. These people will do everything in their power to make the best altar on the day of the dead or serve the best drinks during Samaritan’s Day. Everyone in the community participates so you will see many locals on the streets during these festivals in Oaxaca.

What are the best Oaxaca festivals?

The Oaxaca festivals that you shouldn’t miss are Day of The Dead which happens from the end of October and the beginning of November. This is the busiest time of the year and Oaxaca City transforms into a colorful city with people walking around with Catrina make-up. This is a week-long celebration for the Oaxacans. 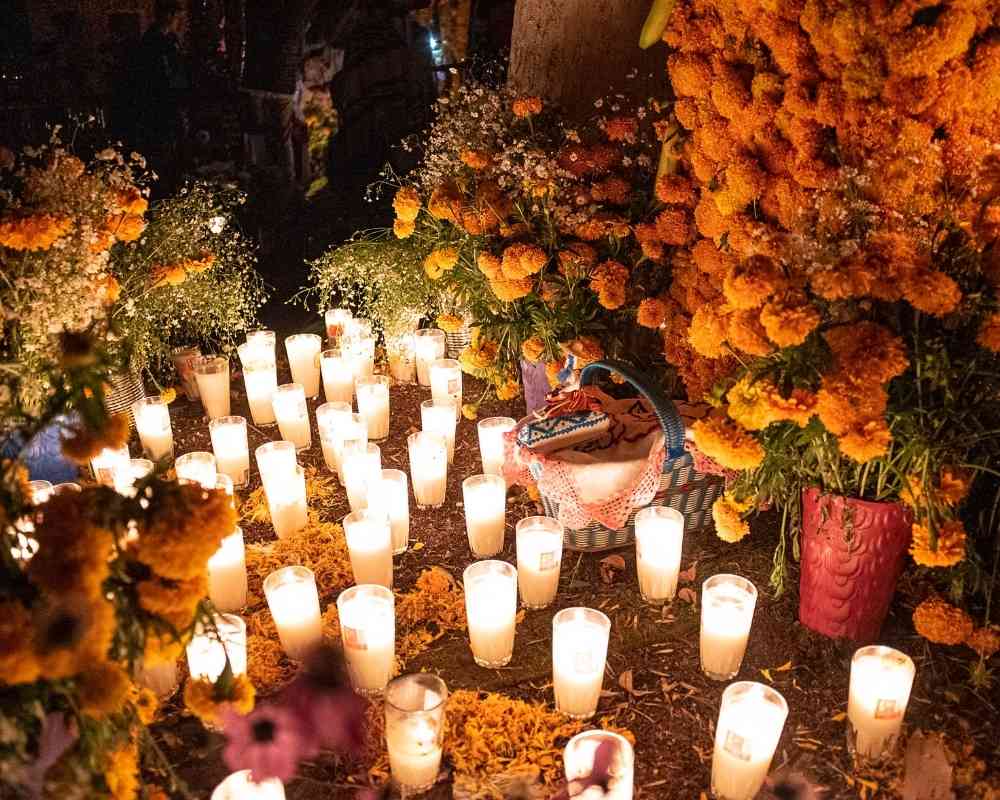 Another festival in Oaxaca that you shouldn’t miss is the Guelaguetza or Lunes Del Cerro, an annual indigenous and cultural event where there will be parades and dances by traditional groups in the state.

Pin the image below on Pinterest and save it for your trip! 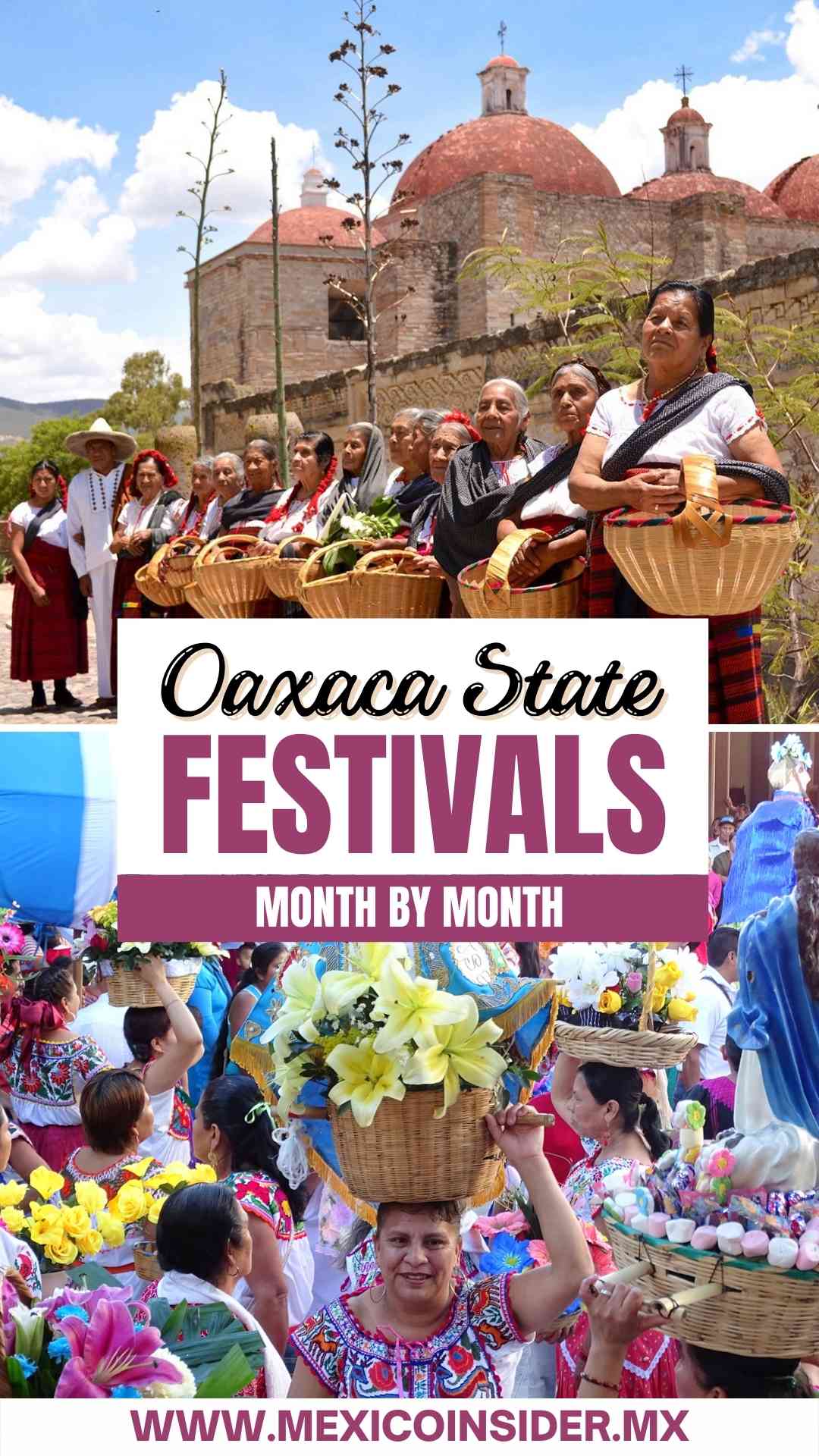 Every year, our staff and crew gather for the day of the dead in Oaxaca City. It is simply our favorite week in Mexico and there are no excuses to skip it. It is very mandatory for us! Oaxaca is the capital of day of the dead and I must warn you – if you do it here the first time, all the other DOTD celebrations in other parts of Mexico will be lame for you. 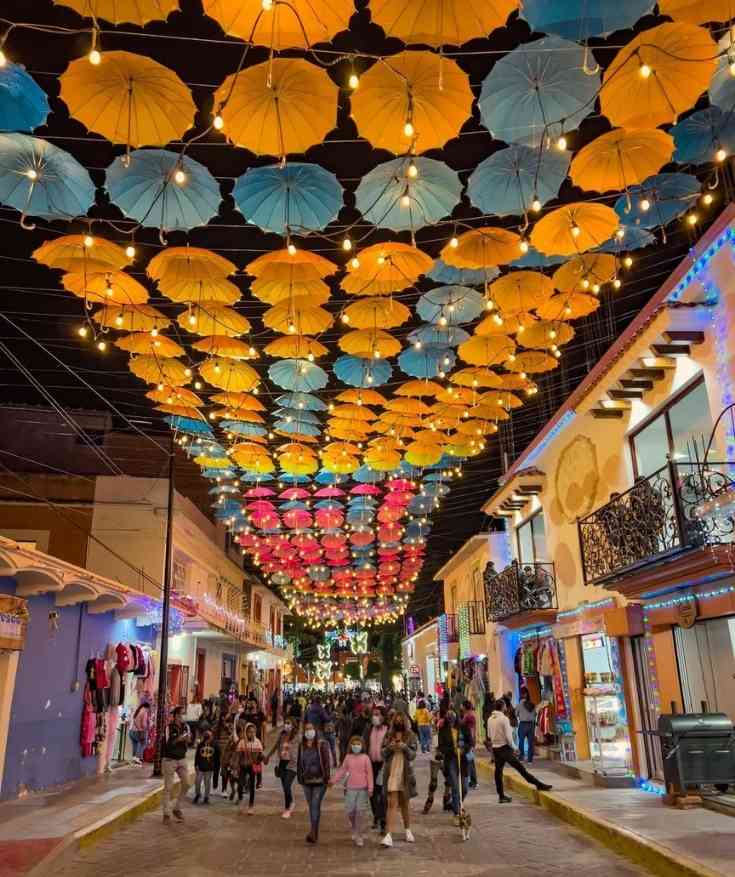 In Zapotec language, Guelaguetza means “offering.” This 2-week festival in Oaxaca features traditional dances from indigenous groups within the state. Everyone parades in their costumes and showcases the rich culture of their respective groups. You don’t have to be in this celebration for the whole 2 weeks if you don’t have time so we suggest you come in the middle of the celebrations towards the end. 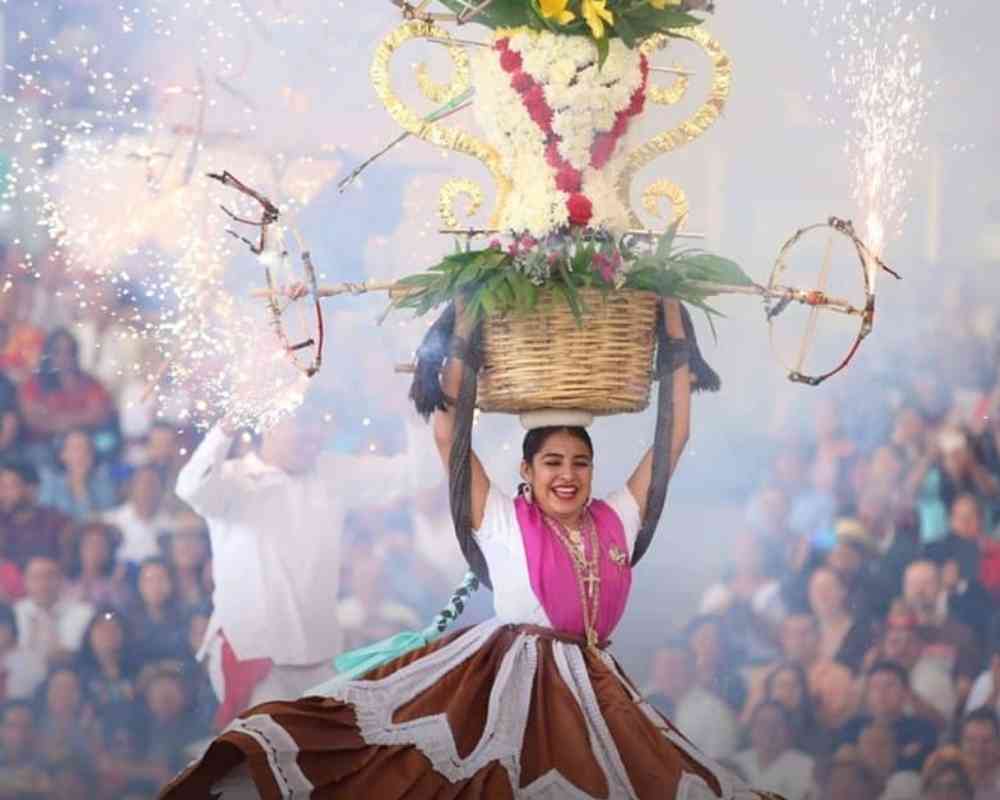 Mexico is still one of the most Catholic countries in the world and this tradition draws back from the 19th century. It comes from 2 parables that we are familiar with: John 4 where a Samaritan woman gives Jesus water. At the time, it was a big deal since Samaritans do not associate themselves with Jews.

Luke 10 is “The Good Samaritan” where a person gets robbed and his neighbors did not help him. The Samaritan saw this and helped the injured man. Today, this tradition is not only limited to religious temples. All businesses and local homes in Oaxaca set up a tent to give away flavored water like chilacayota, horchata, and jamaica, as well as ice cream and regional sweets.

For the Oaxaqueños, Dia de Samaritana reminds us that we should always be good to our fellow humans no matter where they are from, what their religious background is, what the color of their skin is, etc. Aside from the religious origins, it is so fun to go out of the streets of Oaxaca and experience this because this is not celebrated in any other areas in the country. 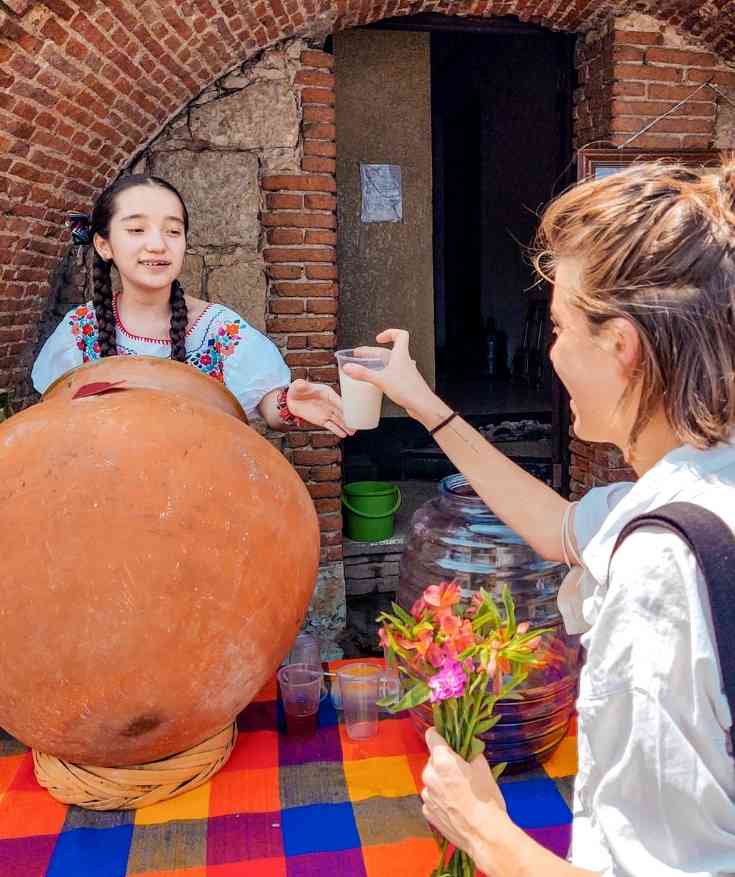 The Oaxaqueños has a popular festival for radish where farmers and local growers exhibit their special designs made with radish. It happens for a few hours on the evening of December 23 when the town holds a contest for the most beautiful radish creation. This is the most sought-after event during the Christmas season in Oaxaca. 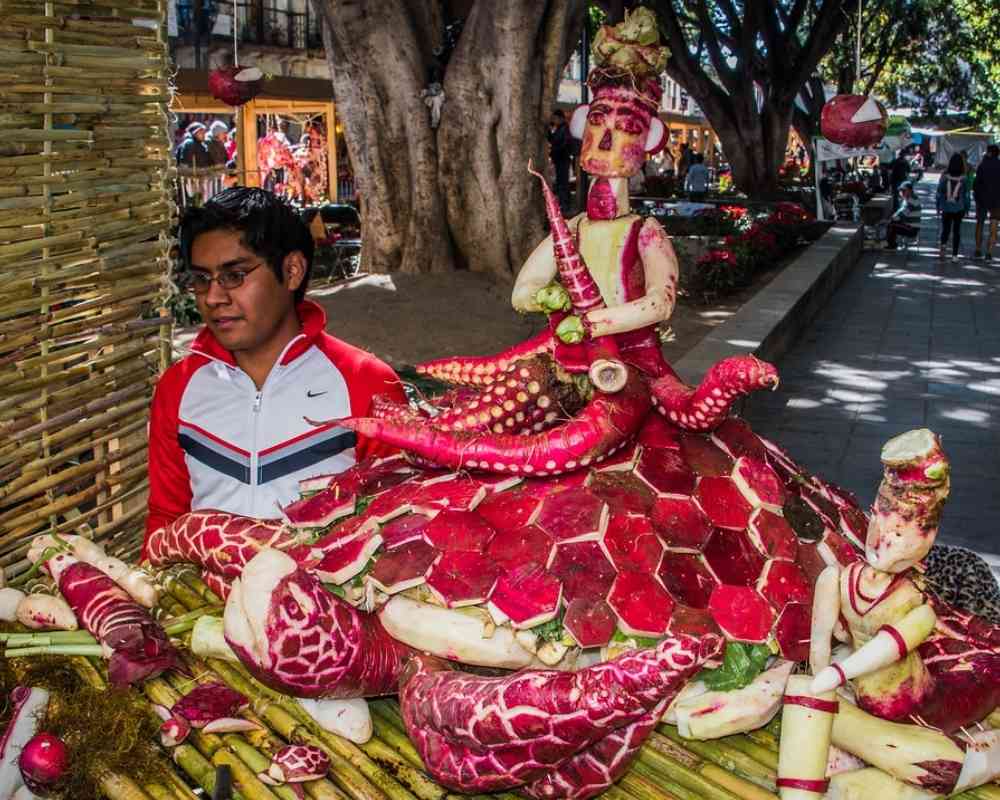 Mazunte is a pueblo magico in Oaxaca that is home to musicians and artists. They have a very thriving art scene in this small town and they hold a super cool annual Jazz Festival! It takes place on the third week of November and lasts for 3 days. This festival is part of the celebrations of National Environmental Conversation Week. Musicians who play here are locals but travelers who are in the area are welcome to participate. 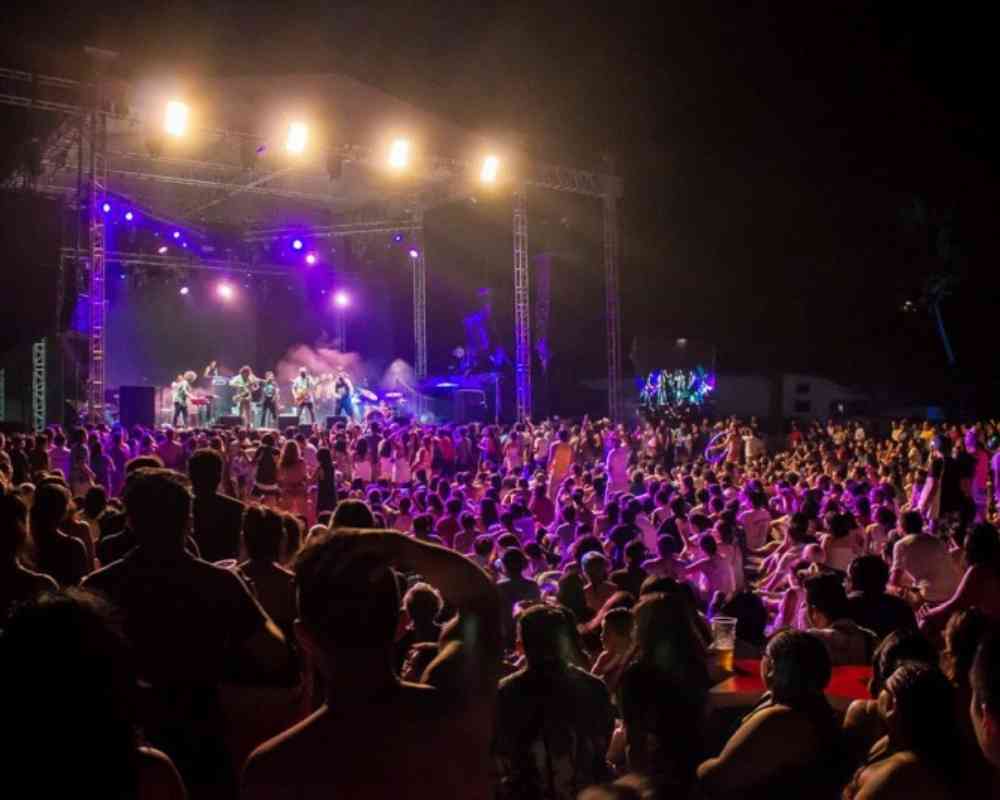 #6: Feast of the Assumption of the Virgin Mary

In the small town of Capulálpam, the Assumption of the Virgin Mary is celebrated and remembered every August 15th. During this time, the streets will be filled with traditional flowers. Another interesting part of this Oaxaca festival is the burning of bulls, monkeys, and turkeys (as offerings). There will also be a lot of music (banda and folklore). 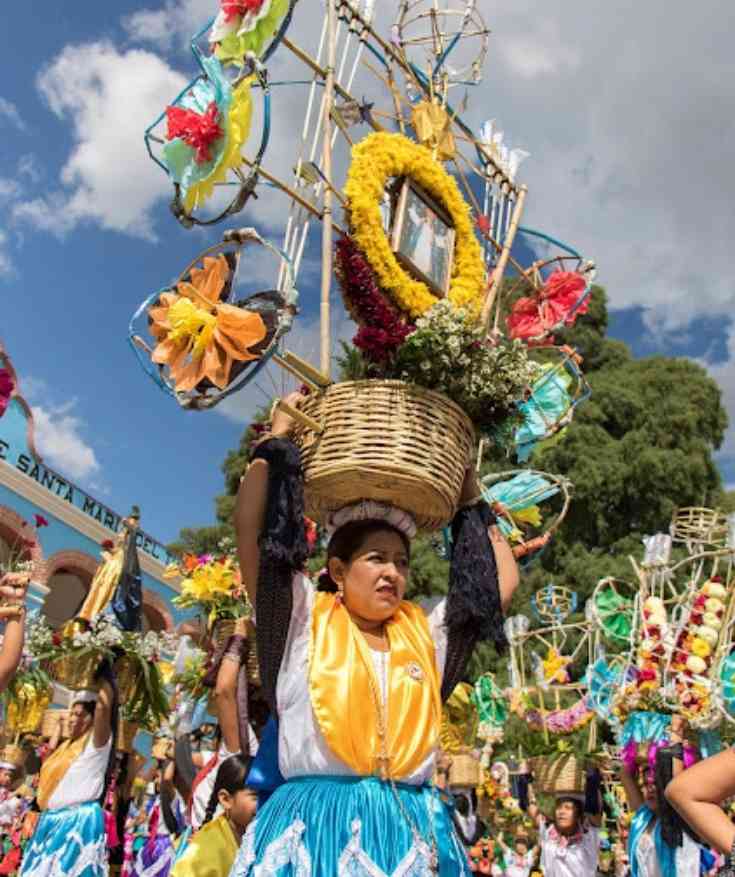 #7: Feast of the Lord of the Stained Glass Windows

From March 3-10, the towns of San Pedro and San Pablo Teposcolula honor the señor de las Vidrieras (lord of the stained glass windows) where traditional dances and concerts are held for the whole week. These towns are also known for using palm in their food so there will be Oaxacan dishes such as black mole and ribs in tomatillo sauce. 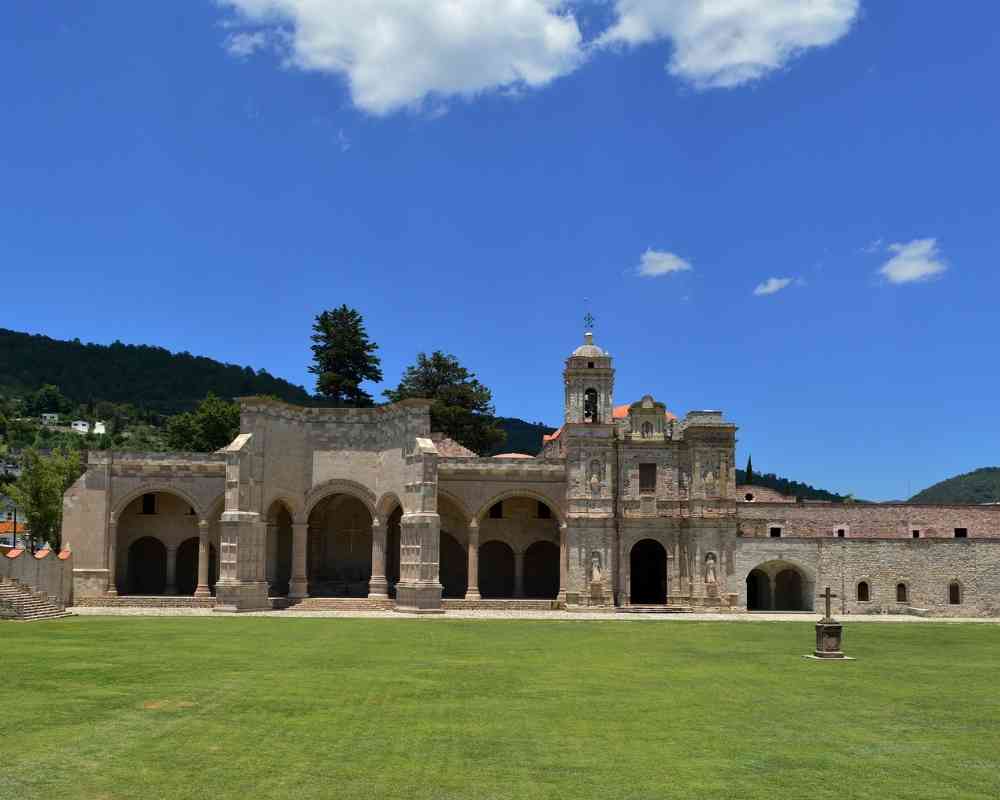 #8: Feast of the Immaculate Virgin of Juquila

The fesat of the Immaculate Virgin of Juquila is on the same date as the Immaculate Conception (December 8). However, the pilgrims start their journey to Santa Catarina Juquila (in large groups), a few days before December 8th. On this day, many religious and cultural activities take place. There will also be dances and fireworks on this day. 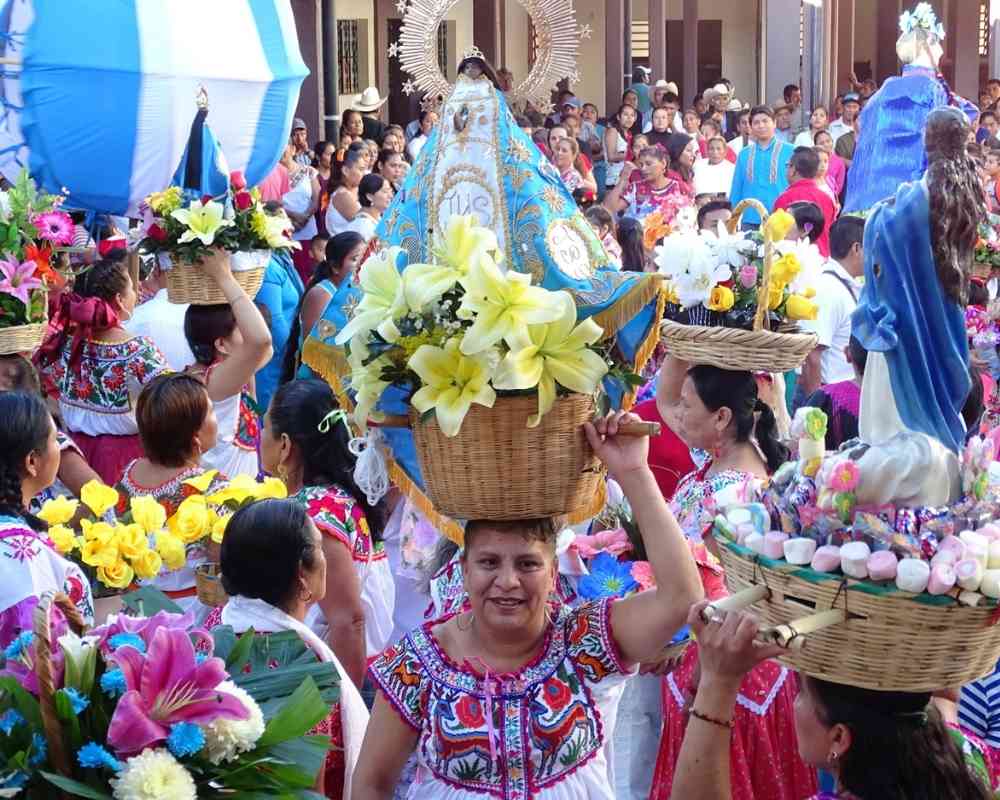 #9: Feast of Saint Paul the Apostle

The Catholic nation of Mexico also celebrates the Feast of the Saint Paul the Apostle which takes place every year on January 25th. The town of San Pablo Villa de Mitla will be filled with marmots, flowers, and traditional dances. There will also be the traditional monos de calenda which are giant puppets that parade the street. A contest for the best monos de calenda is also held. 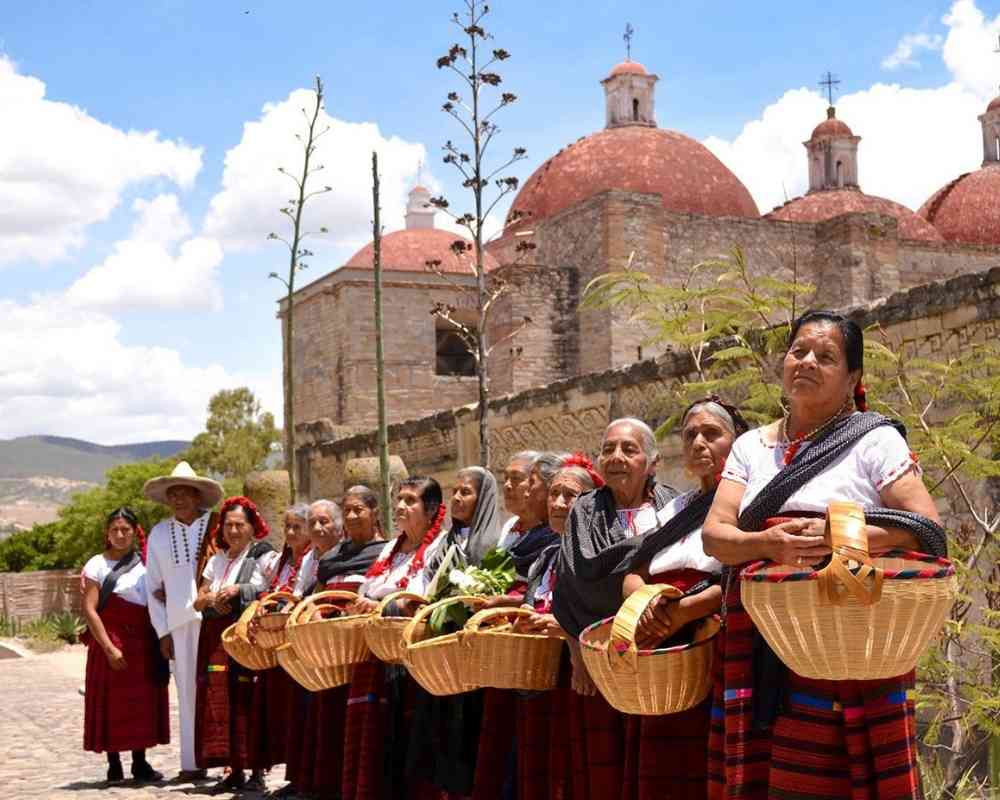 This is also a part of the day of the dead celebrations in Oaxaca but in Huautla de Jimenez, they do a special Todos Los Santos day (All Saints Day) where the town is dyed with colors with altars and offerings on the facade of local homes to commemorate the dead. There will also be much dancing on the streets particularly the Danza de los Huehuentones, a traditional dance in Oaxaca that has been passed down for generations. This dance is very important to the Mazatec community. 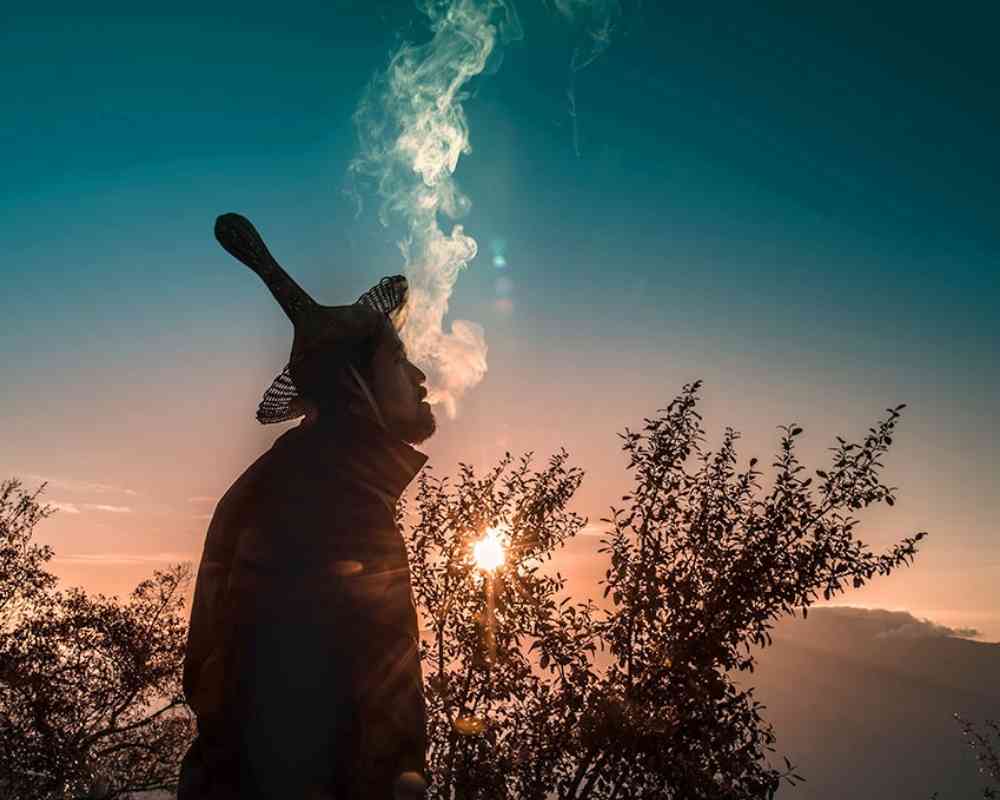 Zipolite Beach in Oaxaca is the only legal nudist beach in Mexico. Every first weekend of February, the Nudist Festival takes place for 3 days with lots of parties, and of course, getting nude. This is one of the Oaxaca festivals that we also don’t miss since it’s very interesting to see an area or event like this in a Catholic nation like Mexico. Most of the activities are environment/health conscious like massive yoga lessons on the beach (naked of course). 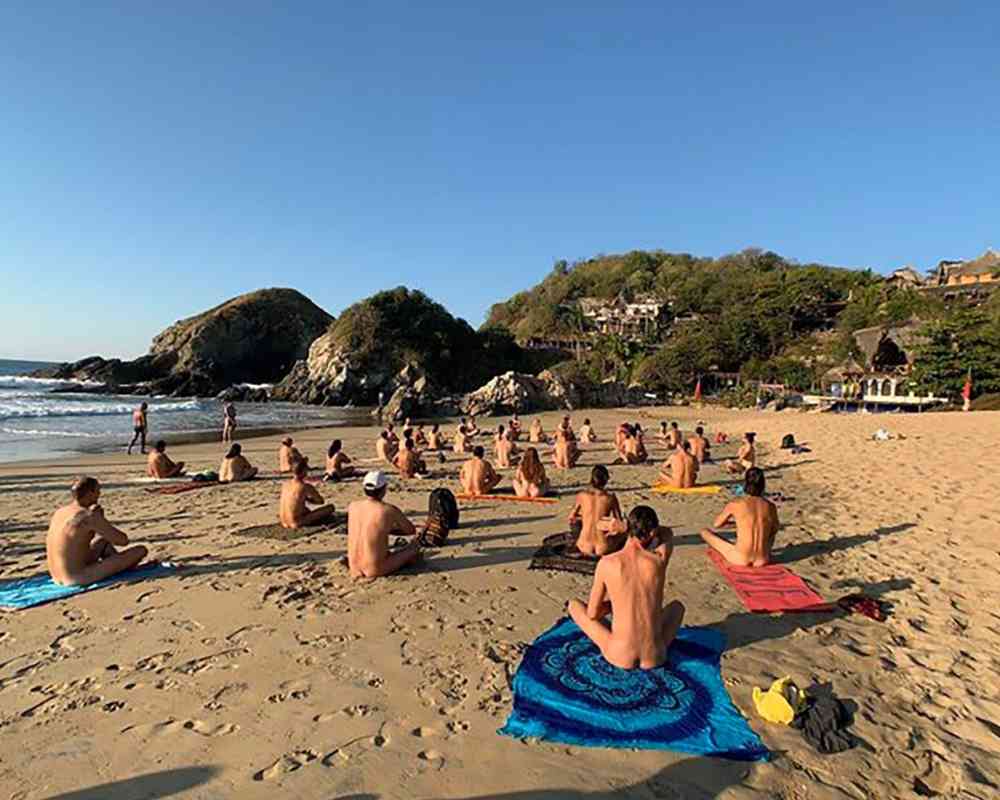 ✈️ Ready for your trip to Oaxaca? If you need more information about the best Oaxaca festivals, I’d be happy to update this post – just leave your questions below!