Oaxaca vs Mexico City is a question that might come up when planning a trip to Mexico. Having lived in both, I can completely understand the dilemma you’re in.

Even though they both share fantastic food, incredible architecture, a thriving arts scene, and a lot more, there are a few key differences that will make your experience in either city considerably different from the other.

While my definite answer for you would be to just visit both, I understand you may not have the time to do that or you may be looking for a place to chill out for a while as a digital nomad.

For that reason, I decided to create this useful comparison guide to answer your burning question: Mexico City or Oaxaca?

Ultimately, your travel style and budget will define what you spend anywhere, but where the basics are involved (accommodation, food, etc), Oaxaca is by far cheaper than Mexico City.

For instance, if you wanted to go full luxury when it comes to accommodation in Oaxaca, you’d be looking into spending $150 USD tops a night, whereas a hotel of the same range would cost you $300-$1000 USD in Mexico City. That’s a huge difference!

Dining scene-wise, Oaxaca is insanely cheaper as well. I went out to a higher-end restaurant in Oaxaca to celebrate a special occasion once and spent $50 USD. After I did the math, I concluded I would have spent at least four times more at a restaurant of the same range in Mexico City.

With that said, though, street food in Mexico City is very cheap, too. So if you’re on a budget, you could stick to that and save considerable amounts of money. As a local, though, I think a huge part of the Mexico City experience is dining out (the scene is absolutely fantastic), so you’d be missing out on a huge part of what makes Mexico City so special.

✈️ Oaxaca vs Mexico City: Access to the rest of Mexico

Direct flights from Oaxaca City are limited to a few select cities like Mexico City and Monterrey. If you want to go anywhere else in Mexico, you’ll need to do a layover in Mexico City first.

Mexico City, on the other hand, offers direct flights to pretty much everywhere in Mexico multiple times a day. You can be pretty much anywhere you want in Mexico within a few hours, and due to competition, flights are usually pretty cheap.

Pin the image below on Pinterest and save it for your trip! 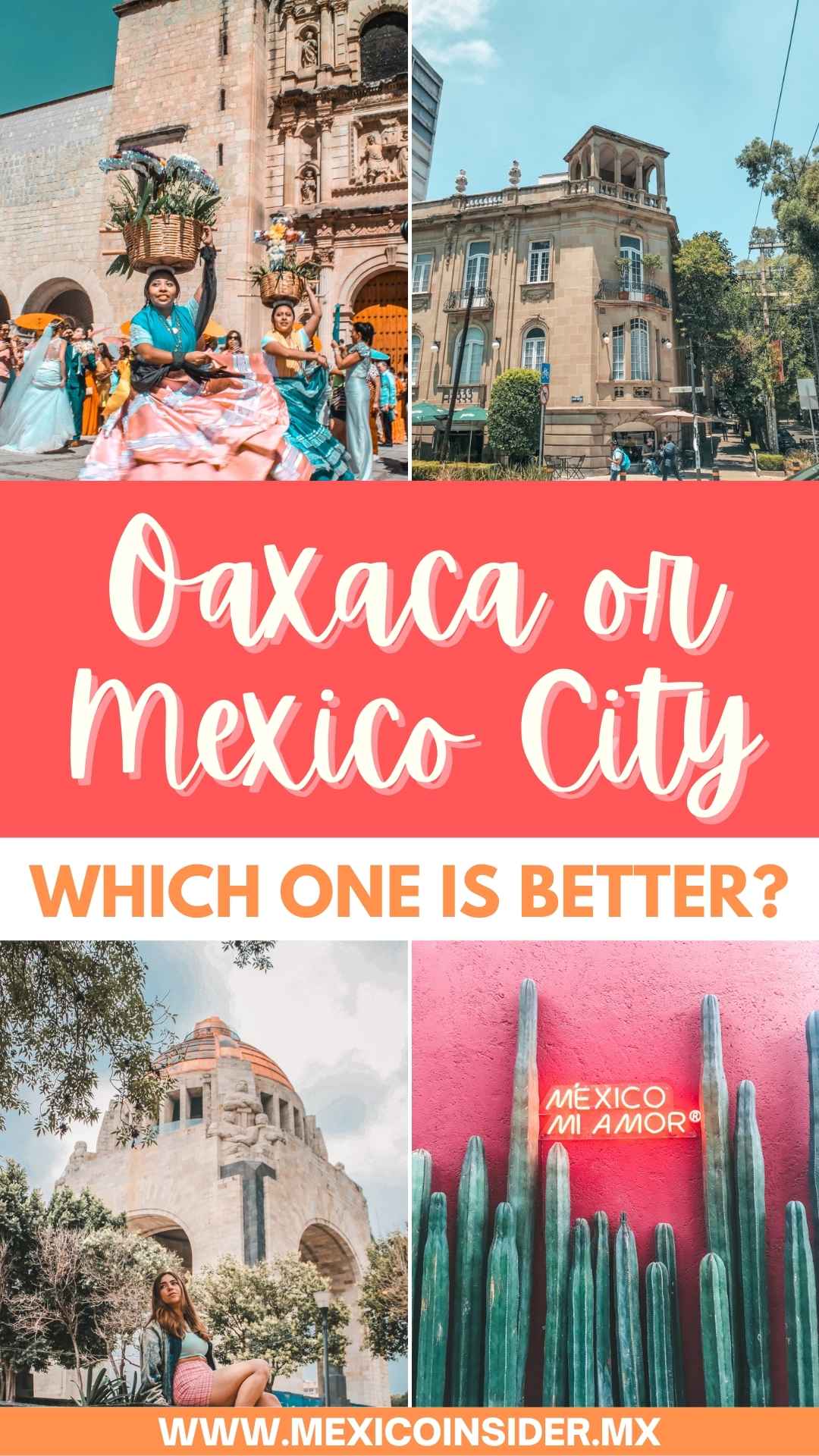 You probably expect Oaxaca to win here, but I think Mexico City does.

There are TWO forests right inside the city – The Chapultepec Forest and Los Dinamos. Moreover, simply visiting the second or third sections of Chapultepec is enough to feel as though you were transported hundreds of miles away from the bustle and hustle.

Plus, Mexico City is a stone’s throw away from several forests, state parks, and national parks in Mexico, including Desierto de los Leones, Nevado de Toluca volcano, the Popocatepetl and Iztaccihuatl volcanoes, La Marquesa, and more.

Of course, Oaxaca City is close to places like Hierve el Agua and the Sierra Norte, too, so there’s also a ton of nature to be explored from here.

Overall, though, I think Mexico City wins in this category because of the number of options available.

Both Oaxaca and Mexico City celebrate Day of the Dead, but the experience in both places is very different.

Day of the Dead feels a lot more deeply rooted and traditional in Oaxaca City, whereas Mexico City offers a more “glamorous” version of it. Plus, Oaxaca is big on parties during Day of the Dead, while Mexico City is much calmer and focuses more on the artsy side of it.

You’ll have a wonderful time celebrating Day of the Dead in both cities, but overall, if you want to experience a more authentic and livelier version of it like the one you saw in movies like Coco or Book of Life, Oaxaca City is your best bet.

Day of the dead celebrations in Mexico:

Both Oaxaca and Mexico City offer great food, so we’ll just call it a draw!

With that said, if you don’t necessarily want to be eating Mexican food all day, every day, Mexico City has plenty more options and you can find pretty much every cuisine in the world here. Indian, Peruvian, Italian, Japanese, you name it, Mexico City has it. Oaxaca also has international food, but there’s a lot more variety in Mexico City.

Moreover, Mexico City also offers a great scene when it comes to high-end and fusion Mexican food. If you love fine dining and want to experience a “fancier” side of Mexican cuisine, Mexico City also wins in that sense.

I find transportation in Mexico City a lot more reliable and accessible. Oaxaca’s city center, where you’ll likely spend most of your time in, is very walkable, so in a sense, it may not even be a big deal when comparing Oaxaca vs Mexico City.

With that said, Mexico City has a thousand ways to move around, and then some more.

When it comes to public transportation, you can choose from the underground, the Metrobus (tram), buses, and even aerial lifts in some areas of the city. Oaxaca only has buses.

Ride-sharing options are aplenty in Mexico City, with Uber, Didi, Beat, and Cabify, to name just a few. This means you can have your ride pick you up in a matter of minutes because there are so many options. On the other hand, Oaxaca only has taxis and Didi.

Other options to get around Mexico City include electric scooters, e-motorcycles, and bicycles. You can just download an app, search where the nearest one is, pick your ride up, and drop it off at any other point in the city.

Of course, Mexico City does have a downside compared to Oaxaca: Traffic! Avoid peak hours at all costs, and if there’s a lot of traffic, the best way to go is to either bike or take the Metrobus because it has its own lane.

✨ Oaxaca vs Mexico City: Things to do

If you’re only looking to travel to Oaxaca or Mexico City for a week or two, I’d say it’s a draw.

Both cities offer tons of activities on their menu, so you will have no issues whatsoever when it comes to filling up your itinerary even if you were to stay a full month in either Mexico City or Oaxaca.

If you’re thinking of staying long-term in either city, though, Mexico City is the winner. Being the city’s capital, it hosts some of the best concerts, festivals, and all sorts of other events.

Moreover, because Mexico City is a lot bigger than Oaxaca, it only makes sense that the city has a ton more to offer when it comes to restaurants, activities, things to see, etc. You could spend a year doing something different in Mexico City and you would still not get to do everything.

Both Oaxaca and Mexico City are safe.

Mexico City, however, does have a few sketchy areas to avoid. If you stay within the safe zones (you don’t really have any reason to go to the dangerous areas), you’ll be completely fine as long as you take all the precautions you’d normally take in a big city.

⭐ Take a look at my Mexico City safety guide for all the information you need on how to stay safe during your visit!

The weather in Mexico City and Oaxaca is pretty much the same, so you don’t need to take this into account when choosing.

I would say Mexico City wins when it comes to day trips. Thanks to its location in central Mexico, it’s surrounded by many different states, which gives its day trips a little more variety.

Mexico City has the best bar in North America, some of the coolest clubs in the world, and a ton of variety, so it wins when it comes to nightlife if you’re into glamorous outings. Plus, world-class DJs and artists are known to frequent clubs like Layla, Looloo, and Republika.

Oaxaca has a more local nightlife, some of which you’ll find right on the street. There are also some pretty cool bars and clubs, and thanks to the city’s smaller size, going bar-hopping is pretty easy here.

Both cities provide a great night out regardless, but in terms of options, I prefer Mexico City. The main upside to Oaxaca’s nightlife, though, it’s that it’s insanely cheaper (I find nightclub prices in Mexico City to equal those of cities like London).

???? The verdict: Mexico City vs Oaxaca

In short: Neither is better than the other, it’s all up to what you’re after from your vacation/move.

If you’re into a slower pace of living, small cities that feel more like towns, and that Mexico vibe you’ve seen in movies like Coco, Oaxaca is the best option for you.

On the other hand, if you like big cities, prefer a faster pace of life, and like having a bit more options when it comes to things to do and activities, Mexico City is your go-to.

When it comes to choosing whether to visit Mexico City or Oaxaca, it ultimately all boils down to your preferences. If you have time, though, I recommend you check both out!

✈️ Ready for your trip to either Oaxaca or Mexico? If you have any questions about choosing between Mexico City or Oaxaca, I’d be happy to update this post – just leave a comment below!

I hope your readers follow your advice and stay away from Oaxaca!

Margaret, was this satire? I was looking at going to Oaxaca in February. Is there something I show know or do you love it so much you are trying to keep people away?