Aside from enjoying the beach, exploring Mayan ruins in Yucatan is one of the highlights of visiting the peninsula.

Mayan culture plays a big part in the experience of visiting places like Tulum, Cancun, Merida, and many other destinations in this region of Mexico. In order to understand things a little better, visiting a few Mayan ruins is a must on your itinerary.

Luckily, many Mayan ruins in Yucatan are either located next to the beach, contain cenotes, or are located close to other incredible attractions worth seeing. This means you can easily combine a day spent getting a dose of history paired with fun adventures! 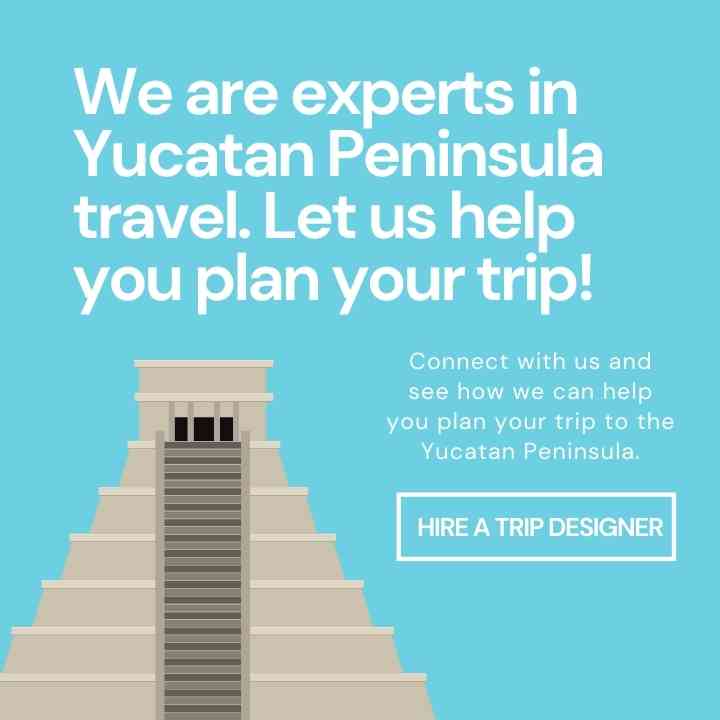 As a note, this post is about Mayan ruins found in Yucatan Peninsula in general, not just the state of Yucatan. This means you will find a list of Mayan ruins in Yucatan, Quintana Roo, and Campeche.

The Yucatan Peninsula has dozens of Mayan ruins and archeological sites, but we’re only highlighting our personal favorites and those we believe are most accessible to our readers.

???? What are some of the best Mayan ruins in Yucatan Peninsula? 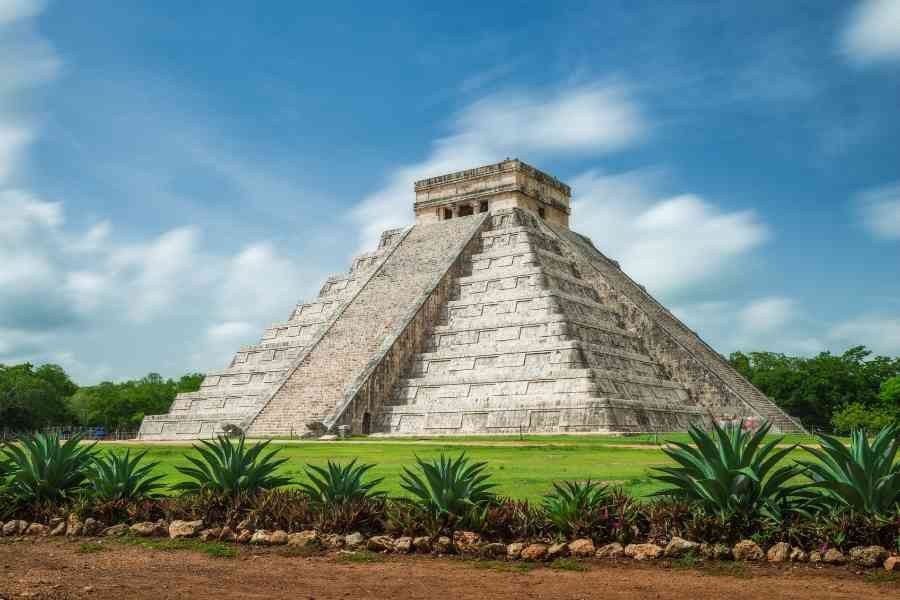 Some 200 kilometers away from Cancun and close to the city of Merida, you’ll find some of the most incredible Mayan ruins in Yucatan and one of the most famous archeological sites in the entire world (so much it is ranked as one of the 7 Wonders of the Modern World!).

Chichén Itzá was once one of the most important cities in pre-Hispanic Americas, and today, you can wander inside its massive grounds in order to get glimpses of what life was like here back in time.

El Castillo temple is one of the most magnificent Mayan ruins on the site, but there’s a lot more to see, including dozens of other Mayan ruins surrounding the main temple as well as a cenote where Mayans were believed to have performed sacrificial offerings and rituals. 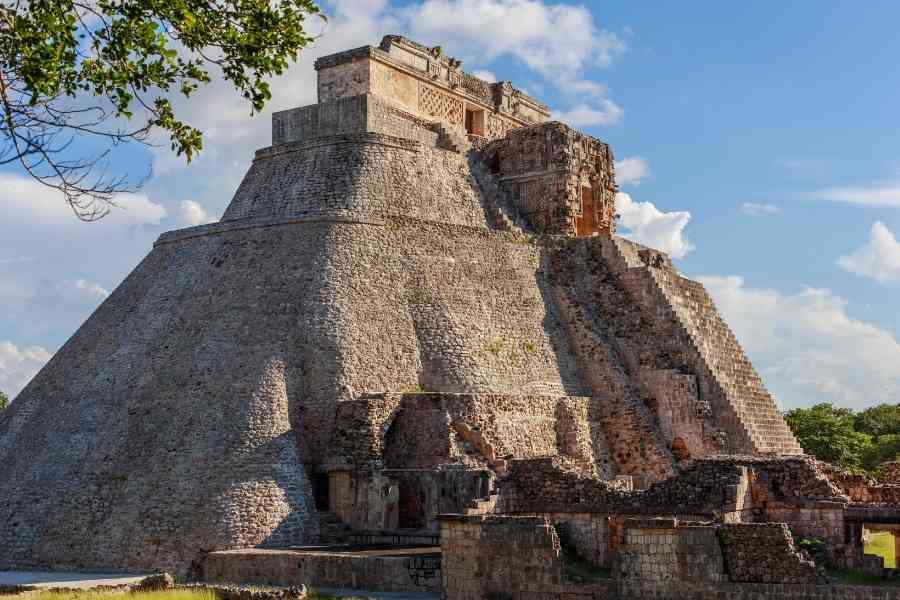 Featuring imposing pyramids and temples, Uxmal translates into “three times built” in order to allude to the fact that it was rebuilt several times.

As a UNESCO world heritage site, what makes Uxmal different from other Mayan ruins in Yucatan is the fact that it features Puuc architecture, which is known for its big smooth surfaces, columns on facades, and intricate decoration and details that feature animals and geometrical figures.

The most imposing structure at this Mayan ruin site is La Casa de Adivino, a majestic pyramid that towers 150 feet over Uxmal. As an ancient legend goes, this pyramid was constructed by a dwarf in just one night, but in fact, it took the effort of thousands of people to construct this massive building. This pyramid was built in a way it would face the sun during the Summer solstice. 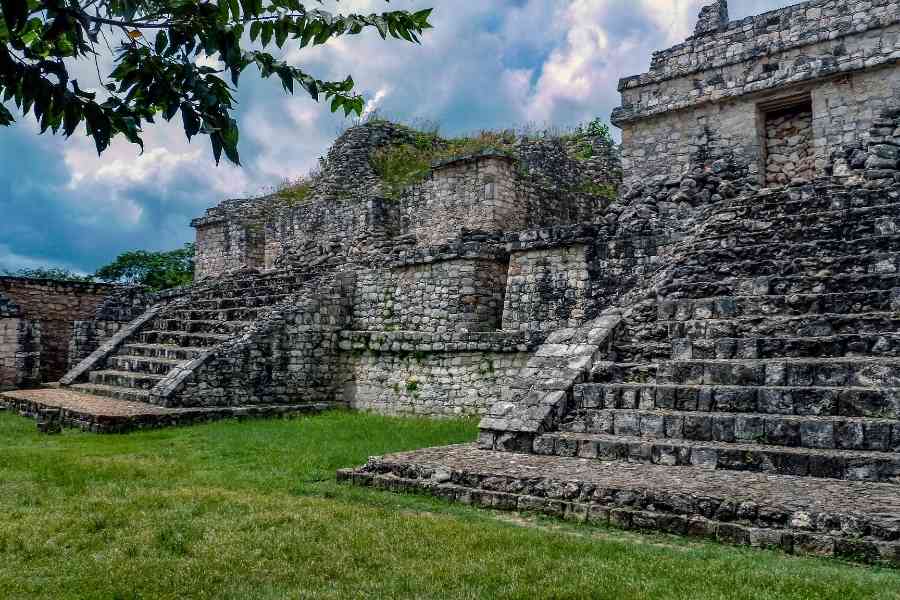 Ek Balam is a name in the Yucatec Mayan language that translates into “black jaguar” or “starry jaguar” (ek= black or star, balam = jaguar).

Even though only the central part of these Yucatan Mayan ruins have been excavated, over 45 temples and structures have been discovered already. The most impressive building on the site is El Torre, a tower that measures a whopping 100 feet in height!

What differentiates Ek Balam from other Mayan ruins in the Yucatan peninsula are the artistic details you’ll find all over the place, especially as you climb to the top of El Torre, which provides beautiful panoramic views of the entire site as its top.

Pin the image below on Pinterest and save it for later! 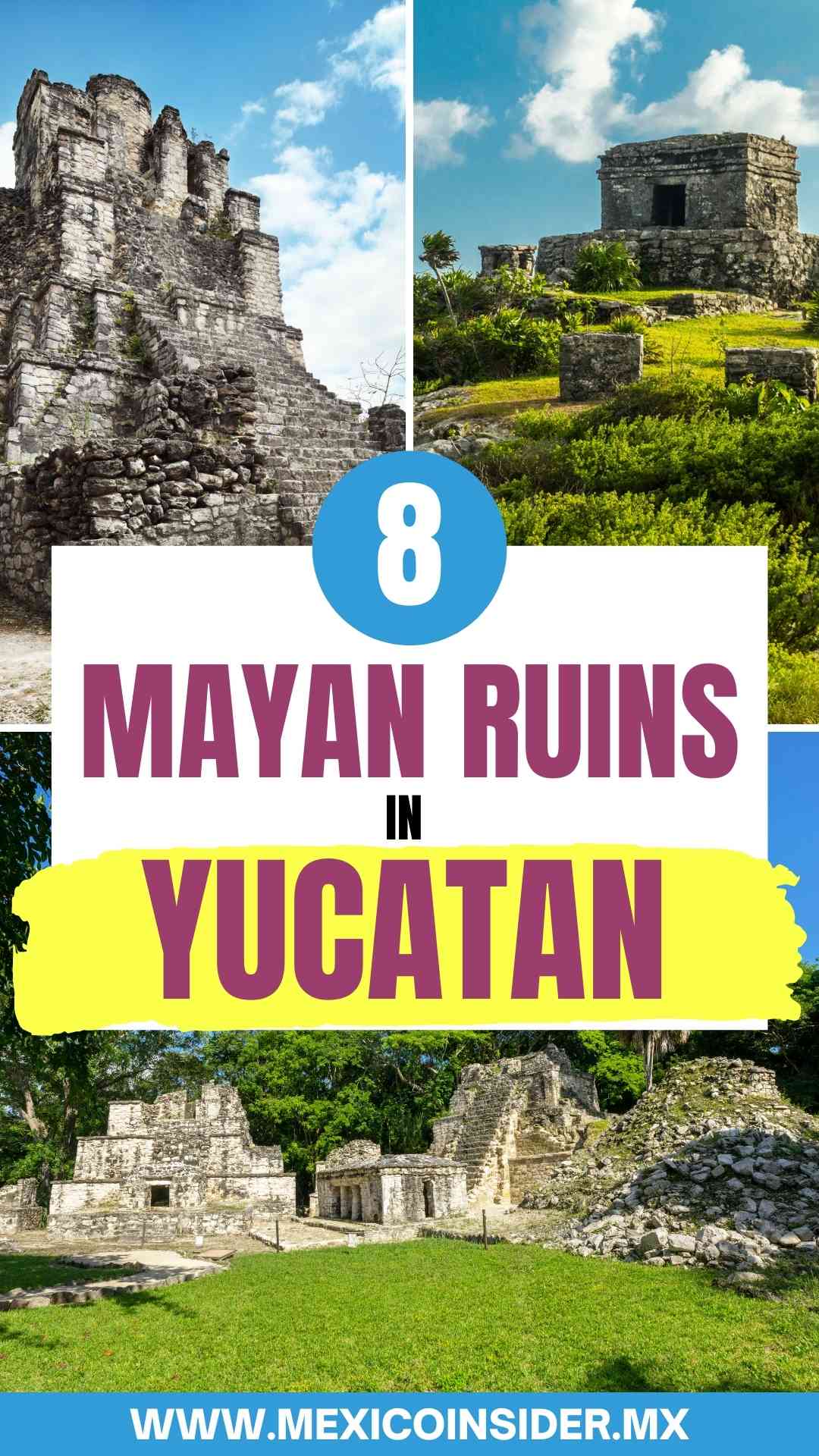 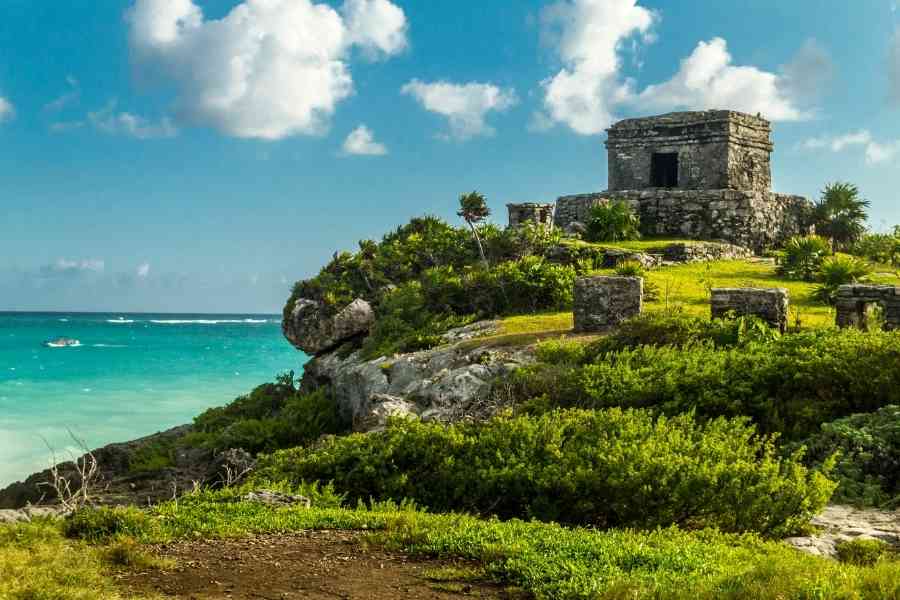 Out of all the Mayan ruins in Yucatan, Tulum’s are some of the most unique ones you’ll find around. For one, it’s the only site that faces the ocean, which made it a key place when it came to protecting the peninsula from outside threats as well as the import and exportation of goods to other regions.

Within the archaeological site, you’ll find over 60 temples. El Castillo is the most popular Mayan ruin and the most photographed place in the Riviera Maya due to its unique location over a cliff overlooking the Caribbean sea. 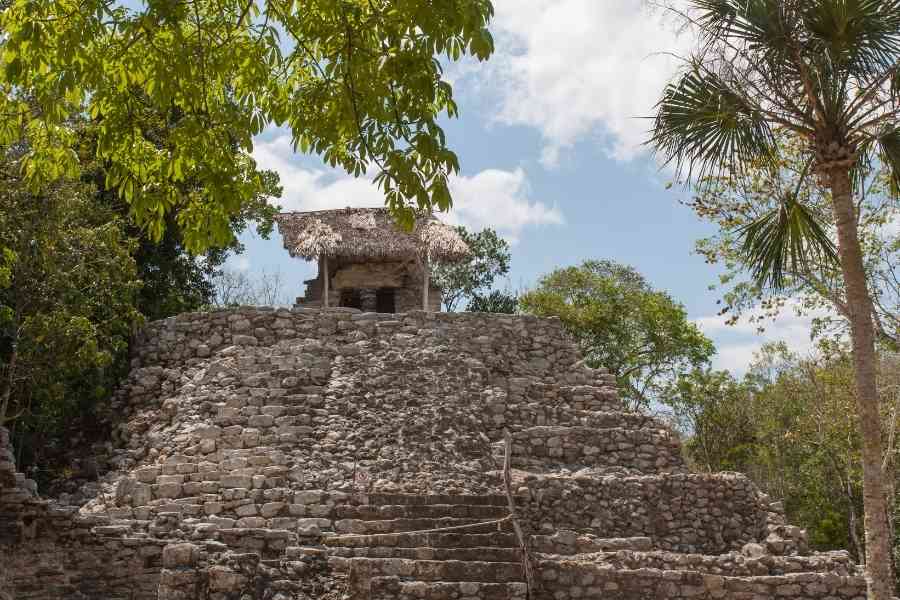 Located midway between Chichén Itzá and Tulum, Cobá was once a major commercial city that homed over 50,000 people. The word Cobá roughly translates into “abundant water” or “mossy water”, which makes reference to the lagoons that surround the site.

Cobá is a huge complex of Mayan ruins and a huge part of it remains unexcavated, making this city one of the most intriguing places to visit in the region. Within the archaeological site, you’ll find Nohoch Mul, an extremely imposing Mayan ruin that is twice the height of the main pyramid in Chichén Itzá as well as other smaller temples. 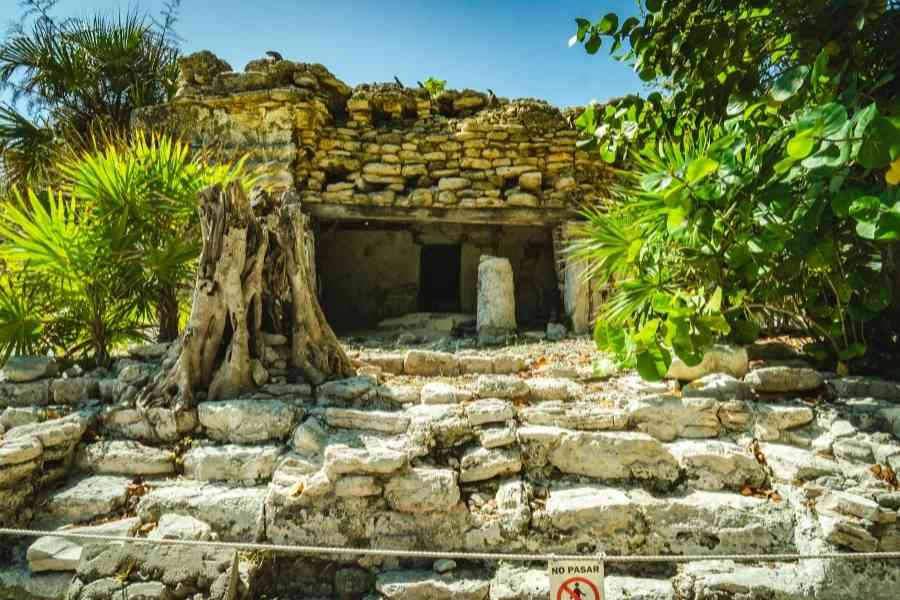 Xaman-Há was one of the first places the Spaniards stepped foot in Mexican lands. Due to its location next to the ocean, its inhabitants were mostly dedicated to fishing and other marine-related activities.

Although it’s not confirmed, many legends state that Xaman-Há was the start-off point for a massive peregrination to the island of Cozumel where Mayans would go to worship Ixchel, the Mayan goddess of love.

The Mayan ruins of Xaman-Há are located in Playa del Carmen. Although small, we highly recommend visiting them if you want to explore a hidden gem in the region 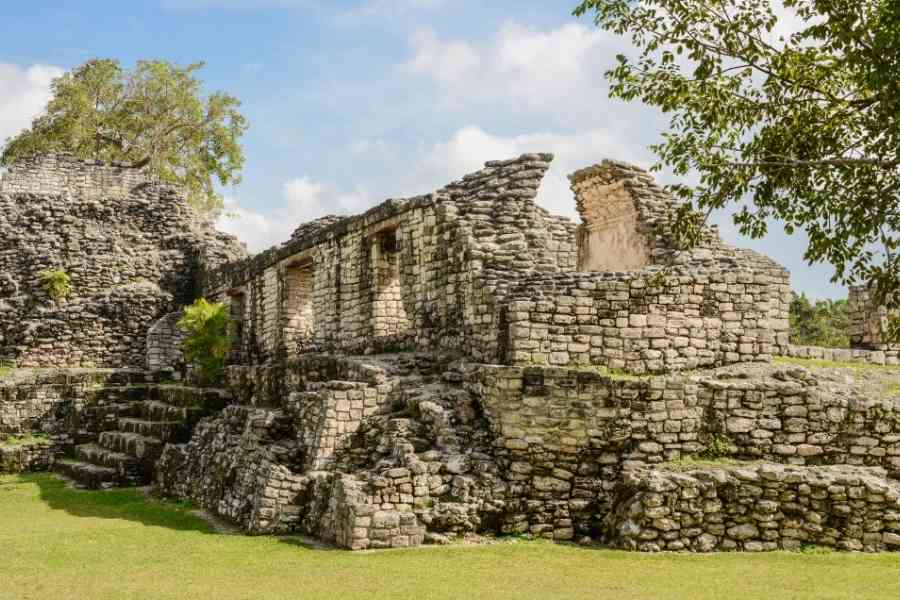 Covering over 8.5 hectares in the middle of the jungle, Kohunlich is still pretty undiscovered and archeologists continue to excavate the area to find new structures hidden in the area.

Here, you’ll find one of the biggest gems of the Mayan civilization: the Temple of the Mask. This massive structure was built between 500 and 600 AD to honor the sun god. It features five perfectly preserved stucco masks that have become a symbol of Mayan culture. 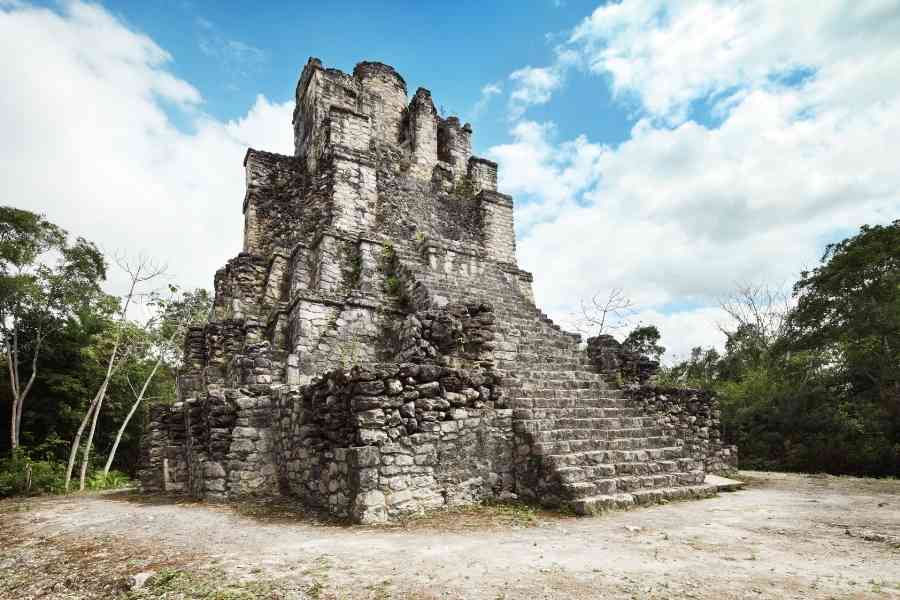 Even though the original name of this Mayan complex remains a mystery, this gorgeous set of Mayan ruins stands right next to the Sian Ka’an Biosphere Reserve, making it a perfect place to visit in order to explore history and nature in one go.

Muyil extends over 38 hectares across the jungle and features El Castillo, the highest pyramid on the Riviera Maya coast. Aside from exploring the Mayan ruins across the site and getting a serious dose of history, this Mayan site also features a lookout to a beautiful lagoon of the same name.

✈️ Ready for discovering the Mayan ruins in Yucatan? If you need more information on Mayan ruins or the Yucatan Peninsula, I’d be happy to update this post – just leave your questions below!