I grew up in Mexico City and the many destinations in Guanajuato weren’t really on my radar for the longest time. Aside from San Miguel de Allende and León’s annual balloon festival, there was very little I knew about the state.

When I moved back to live in Mexico City permanently, I made it my mission to explore as much of it around it as I possibly could. Even though Guanajuato is actually located several hours north of the city it still makes for an easy day trip or even weekend getaway thanks to the fact that there are plenty of bus routes available. 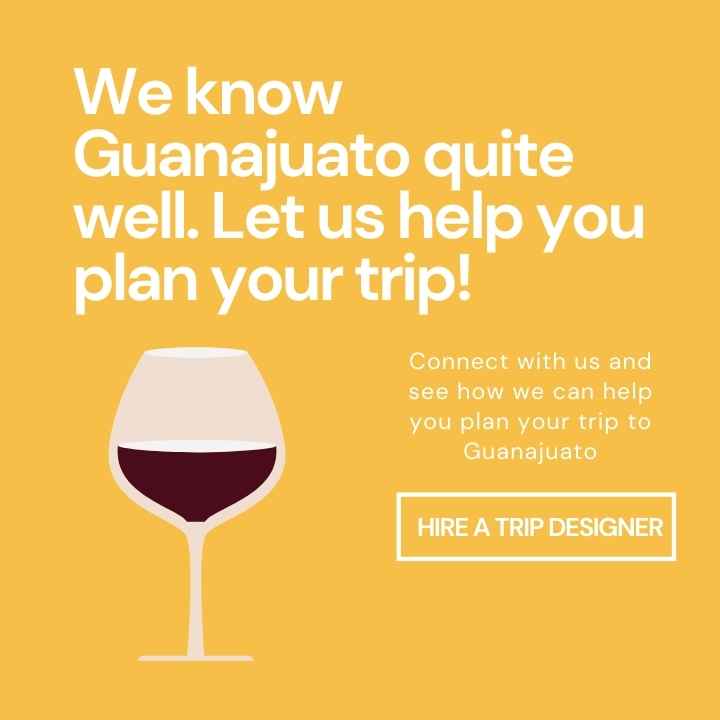 Instead of visiting San Miguel de Allende, which I already know like the back of my hand, I decided to focus on a few lesser-visited destinations in Guanajuato. I had no idea Guanajuato had so much to offer in terms of culture, nature, architecture, and even wine-making!

While I still have plenty to explore in Guanajuato (luckily, I’m headed back there in a week, so I’ll be updating this post soon), I thought it worth it to write a post about some of the best destinations in Guanajuato I got the chance to visit on my last trip. These are them.

✨ What are the best places to visit in Guanajuato?

San Miguel de Allende and Guanajuato City are still the most popular places to visit in the state of Guanajuato. These two cities are known to be safe for tourists, and many expats from the US and Canada live here. These are the most colorful cities in Mexico and it has a unique charm that people are drawn to it.

However, I’d like to introduce you to other destinations in Guanajuato just in case you want to discover new places. Guanajuato is a beautiful state so go beyond exploring San Miguel de Allende!

Dolores is one of the best destinations in Guanajuato to combine wine and history.

⚠️ Which destinations in Guanajuato are safe?

The safest destinations in Guanajuato are again, San Miguel de Allende and Guanajuato City. Dolores Hidalgo (the wine country of Guanajuato state) is also safe. This state has the highest crime rate in Mexico but these are places to visit in Guanajuato that are super safe. I will share my personal experiences in this post! 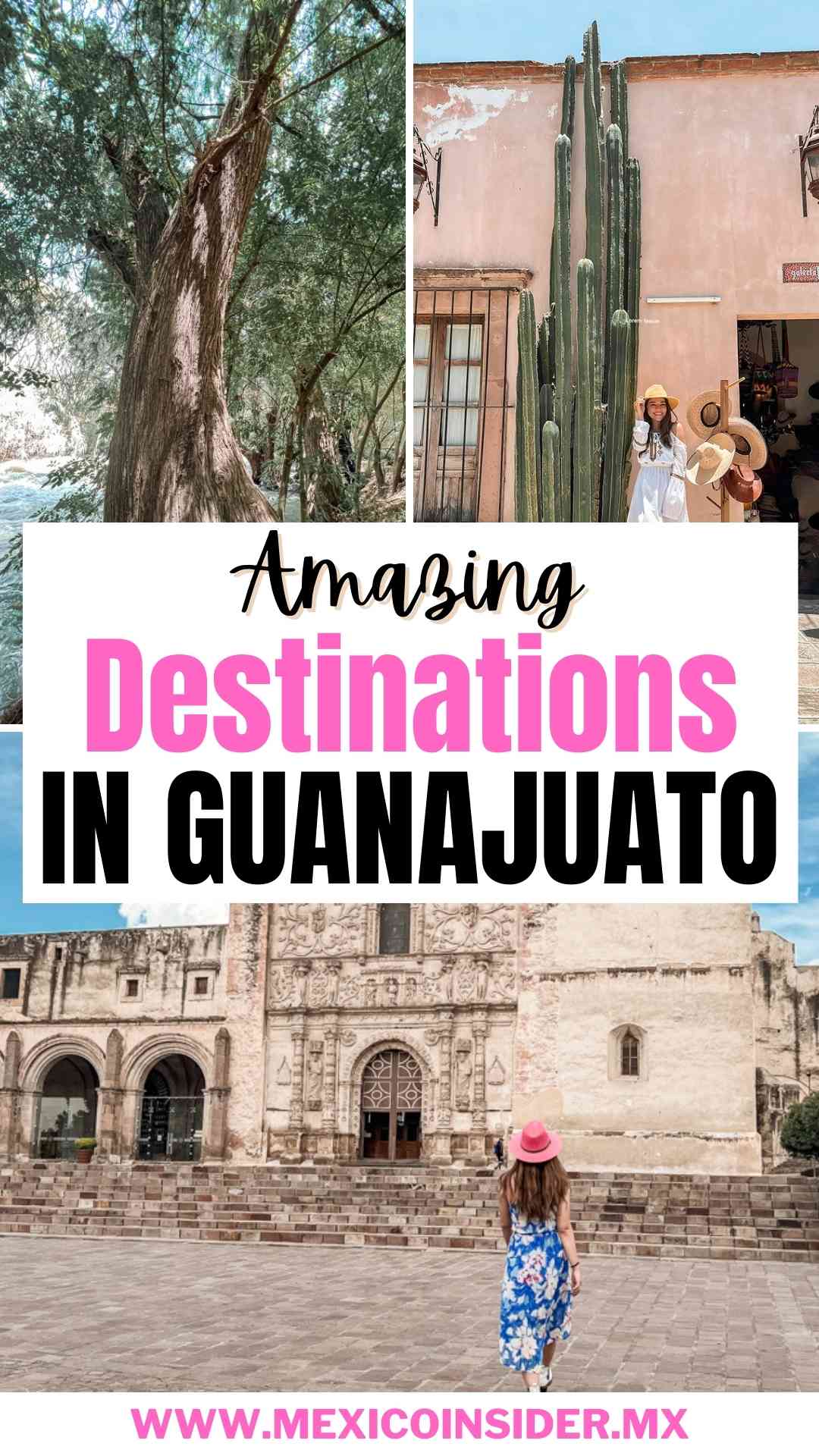 Pin this image on Pinterest and save it for later!

???? Places to visit in Guanajato aside from San Miguel de Allende

Mineral de Pozos, commonly called just “Pozos” by Guanajuato locals, was once a thriving mining town during the 19th and 20th centuries. After conflicts arose during the Mexican revolution and a pretty hefty decline in resources, the once-bustling town was abandoned, leaving it with just a couple hundred residents by the time the 70s arrived.

Even though Mineral de Pozos will likely never get back its original boom, today, it’s one of the best destinations to visit in Guanajuato, especially if ghost towns are your thing!

During the weekends and summers mostly, visitors flock to the town in order to check out its abandoned buildings and mine ruins. The town definitely bursts to life during these times, but the rest of the weekdays still feel pretty deserted!

Walking amid the cobblestone streets of Pozos is pure eye candy and a photographer’s dream, but the main reason people visit is to check out the mine ruins located on the outskirts of town.

Mineral de Pozos is easily my favorite destination in Guanajuato due to its wonderful history and ghost-town feel.

Another highlight of Mineral de Pozos is visiting the town’s famous lavender field inside Rancho de las Barrancas. Even though it’s pretty small, you can learn a lot about lavender and the importance it has on Guanajuato as a whole.

There is also a restaurant inside the rancho, where you can try unique goodies like hamburgers made out of lavender bread, cookies, and lavender-based beer!

Yuriria is a pueblo mágico located in the southern part of Guanajuato that is a must on your itinerary if you love nature and architecture.

The small town is towered by a convent that looks more like a medieval castle, while the rest of the place is dotted with colorful colonial buildings and structures.

Aside from the beautiful buildings you’ll get to see all over, the reason people visit Yuriria is to get the chance to see the town’s lake and a volcanic crater, both of which are located inside the town!

During the weekends, the lake is a great place to go boating, fishing, and bird-watching. There’s also a lively restaurant called Centro Gastro Artesanal, where you can grab a drink and a bite with beautiful views of the lagoon.

From the lake, you can walk for about half an hour or take a taxi to La Joya, a volcanic crater where you can kayak, bike, hike, and even explore a cave.

Dolores Hidalgo is actually one of the most important destinations in Guanajuato and entire Mexico.

It was here where people were called to pick up arms and fight against Spain to achieve independence in 1810. In a way, we could say Dolores is the cradle of Mexico as we know it, and it’s all thanks to the priest-turned-revolutionary-leader, Miguel Hidalgo, who stood at the church in order to unite the people.

During your visit to Dolores Hidalgo, you can walk through the town’s quaint streets that still hold a very old-world charm to them. The Parroquia de Nuestra Señora de Dolores towers over the main plaza – it was here where Miguel Hidalgo rang the bell to call the country to start the battle against the Spaniards!

Another highlight of Dolores Hidalgo is that it is the starting point of Guanajuato’s Wine Route. One of the most popular vineyards to visit in the town’s outskirts is Cuna de Tierra. Here, you can explore the humongous estate and observe the wine-making process as well as have a wine-tasting session paired with a culinary tasting.

Last but not least is Salvatierra, a small pueblo magico close to Yuriria. I was hesitant to go here because I’d heard bad things about the town being somewhat dangerous, but I felt very safe during my visit.

The town itself didn’t feel like anything special in my opinion, but it does have some beautiful religious buildings and old haciendas all over, which are a treat to observe.

Salvatierra offers a blend of religious architecture and beautiful nature

The highlight for me in Salvatierra was El Sabinal, a small eco park about 10 minutes away from downtown. Here, you’ll find a gushing river and a waterfall, both of which are super refreshing to stroll along!

I visited on a Wednesday morning so El Sabinal was pretty empty, but I heard it can get somewhat crowded during the weekends with Salvatierra locals who come here to escape the heat of the main town.

✈️ Ready to explore the best destinations in Guanajuato? If you need more information about Guanajuato, I’d be happy to update this post – just leave your questions below!

Thank you Daniela. What about the city of Guanajuato itself? Any thoughts on “be sure to see, eat, do” places? Going to both Guanajuato and Morelia in January for 5 days each.

Hi Charles! Guanajuato City is definitely a must, it's one of the most beautiful places we've seen in Mexico. I'll be updating this post soon as I just got back from another trip, so please check back in the next few days!

As for Guanajuato, I love Casa Ophelia for breakfast, it has a very local feel to it and their food is great. For sunset, the rooftop at Antigua Trece is great. There's a lot to see in the city, but the best thing is to simply walk around and explore its colorful streets and small alleys. A few musts: Mummy Museum, Museo Iconográfico del Quijote, and the Diego Rivera Museum. Make sure you also go on a "callejoneada", they're walking tours usually run by students and they take you all over the city singing and narrating leyends from the city.

We'll be posting a ton on Guanajuato over the next few weeks as we just got back from exploring a few lesser-known places in the state, so I recommend you check back here. San Felipe is gorgeous and just recently opened to tourism! :-)